I recently turned 27 and realized that there are two things everyone should know how to do: 1) Ride a bike and 2) How to poach an egg. Until this morning I didn’t know how to do either. I’m too scared of falling to get on a bike, but cooking mishaps don’t faze me. So, today I googled “how to poach an egg” and decided to give it a go.
My first attempt failed miserably. I didn’t wait for the water to reach the almost boiling point, so when I removed the egg from the pot it was a slimy mess (the water was not hot enough for the whites to cook). I paused for a moment and considered having a bowl of cereal, but then decided that I really needed to update the site with a new post and I was really craving an egg. So, I gave it another shot. This time, I was careful to wait for the water to be the perfect temperature before gently lowering the egg into the pot (it has to reach the point of almost boiling – not actual boiling, but right before it boils). I was scared to lift the lid for fear of finding another fail, but this time it was perfect! I got me a poached egg. 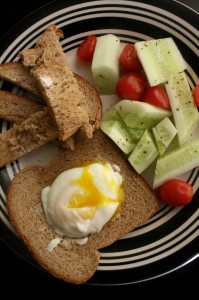 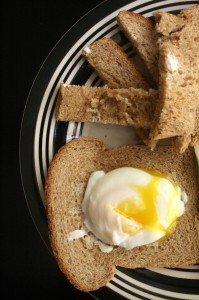 Directions:
Crack an egg into a small bowl or cup. Fill a pot with a few inches of water. Bring to the point of almost boiling (if it has started to boil, lower heat so it is no longer boiling). At this point, slowly pour the egg into the water (using a slotted spoon gently bring the whites closer to the yolk – this will help it hold together). Turn off
the heat and cover the pot. Allow it it sit for 4 minutes so the whites can cook. Lift the egg out using a slotted spoon. Serve over buttered toast or a fresh garden salad.

2 thoughts on “Poached Egg on Toast”