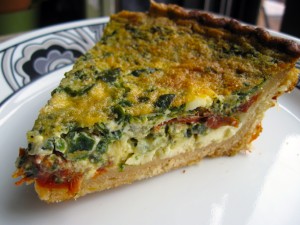 Often mistaken as a frou-frou French concoction (it actually originates in medieval Germany), quiche gets a pretty bad rap sometimes. True, the word “quiche” often summons visions of snooty country-club women brunching with mimosas in hand, but, truth be told, quiche was an invention of convenience; an easily transportable food item enjoyed by the masses. Quiche gained especially wide popularity during World War II in England, due to its ease of preparation and its sparing use of meat, in favor of vegetarian ingredients.

Since we no longer ration ingredients in this country, quiche recipes abound, overflowing with pork products. But, quiche is versatile, so let’s try and change that. Quiches take very little prep time or experience. In fact, most of the prep work can be done in a blender, food processor, or whisked up in a bowl. With the convenience of ready-made pie crusts, what have you got to lose? Besides, who wouldn’t want pie for lunch?

Directions:
* Following package instructions, blind bake the pie crust until slightly browned (alternatively, use your own).
* Preheat oven to 375. In a medium bowl, combine eggs, milk, cream, salt, and pepper, blending until smooth and well combined. A stick blender works well for this, as do electric beaters. Set aside.
* Over medium-high heat, saute onions and sun dried tomatoes (there should be enough oil from the tomatoes to help with the cooking process, but if not, add a little more). When onions are soft and translucent, add spinach and continue cooking until spinach is soft. Season lightly (depending on how salty your feta is). Remove from heat and set aside.
* When pie crust is done, cover bottom with crumbled feta cheese, and then top with spinach mixture. Make sure the spinach and cheese evenly cover the bottom of the pie crust. They will float up during the baking process. Pour in egg mixture, place into preheated oven and bake for about 20 minutes. Decrease oven temperature to 350 and continue baking for an additional 20-25 minutes (about 45 minutes total baking time), or until filling has set (ie, does not wobble if disturbed). If crust or top begins to brown too much, cover gently with foil. Cool slightly and serve warm. Leftovers may be gently reheated before eating.

One thought on “Mediterranean Style Quiche”