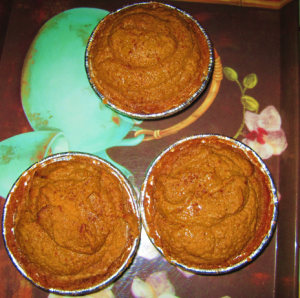 I think Pumpkin pie is underrated. It’s a healthy dessert chock full of vitamin A, Potassium and fiber. But at the same time it’s a slice of delicious, cinnamon, creamy goodness. My Bubby I share a love for pumpkin pie. I wanted to try and create a healthier low cholesterol version so both me and my bubby could enjoy the treat without her having to worry about the high cholesterol or sugar content that most pies have. Thus was born the pumpkin munchkin pie! Sometimes my bubby and I eat them for breakfast with a cup of coffee and schmooze a little while we nosh. I don’t think it should only be relegated solely to Thanksgiving. The bright orange pie always has a place in my fridge. When this dessert is made with egg beaters and no calorie sweetener, the pies are almost- dare I say it? Guilt free indulgences! The no calorie sweetener that I use most often is Truvia. It’s made using the stevia plant, it’s pareve and it has no aftertaste. I just discovered the stuff not too long ago at my local supermarket, and I find that the pleasantly sweet flavor is so close to sugar that I can’t even tell the difference and neither can anyone else who tries my pumpkin muchkin pies. I included a low fat version using egg beaters and no cal sweetener for those counting calories and for those who feel “there ain’t nothin like the real thing” go for the eggs and sugar version! Either way you bake it, Bon Appetite’!

Directions:
Preheat the oven to 350degrees. First empty out the can of Libbys pumpkin into the mixing bowl. Then add the cup of eggs or egg substitute. Add the vanilla extract, the pumpkin spice, and the sugar substitute. Beat the pumpkin mixture with the hand mixer until the ingredients are evenly distributed and the batter is a smooth consistency. Place the mini Keebler pie tins in the 12 by 10 pans spray them with cooking spray and using a big spoon evenly divide the pumpkin batter among the tins. Generously spray the top of the mini pies so that they will form a nice golden crust and sprinkle a little cinnamon on top to taste. Place the tin pans in the oven (preferably on the middle shelf) for approximately 30minutes or until the pies form a nice golden peaks. Check on the pies after 15 minutes just to get an idea of how long to keep them in the oven. After they are done set them on a wire rack to cool and sprinkle a few pecan halves or a dallop of low fat whipped cream (I love cool whip free).